Why LaSara vs. the Competition


Why LaSara vs. the “competition?”

LaSara Medical Group deploys the use of extracorporeal shockwave therapy (ESWT), these are focused shockwaves that are used to treat erectile dysfunction. When applied to the penis, shockwaves stimulate blood vessel growth and soft tissue repair, and trigger endothelial stem cells to rehabilitate the vascular (blood flow) disorder causing the inability to achieve an erection. As a result, a man’s natural ability to achieve an erection without medication is restored.

Focused shockwave technology is fundamentally different to acoustic wave therapy is sometimes referred to confusingly as “shockwaves” or “pressure waves.” Despite many clinics within the United States using acoustic wave therapy devices, to date, their machine or protocol has not been clinically studied to be effective or safe for treating erectile dysfunction.

Acoustic wave therapy is akin to sound waves, which are ongoing oscillations that propagate outwards, i.e. radially, much like waves on the surface of water. When applied to the skin the effect is much like a vibratory massage. Blood flow increases, the skin warms up, it turns red and there may be an inflammatory response. Due to the surface level response and pain experienced during the treatment, many men believe there is positive change occurring, but the change is only experienced at the surface level of the penis and not internally.

This outcome is consistently misleading to a patient. In the short term, pain and redness may signify change, but in the long term, most men experience little to no positive change to their erections. The below figure illustrates the depth of a pressure wave. 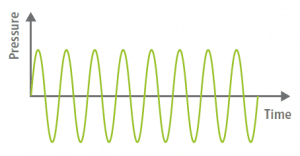 Acoustic wave or radial pressure wave devices are classified as “Class 1” medical devices in the United States by the FDA. Their status is similar to vibrators that do not require regulatory approvals and can be used by anyone, with or without medical training. This is why you may see a large number of providers using this device as anyone can acquire them.

What are focused shockwaves?

Focused shockwaves are instant single pulses. As the pulses are focused, they converge at a certain point within the tissue as shown in the image below. Their effect occurs at the level of cells and is often not visible on the surface of the skin. Considerable research has been conducted on the effects of focused shockwaves on the penis and crura as a treatment for erectile dysfunction. Many large-scale blind studies have confirmed the treatment is effective for ED that is caused by deficient vascularization, also known as a blood flow disorder. 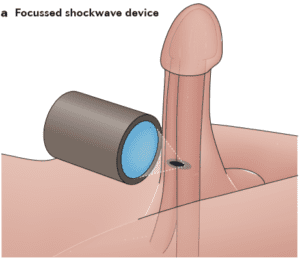 Focused shockwave devices are Class 111, requiring pre-market approvals, documentation on their clinical safety and effectiveness and can only be used by medical personnel and only for approved applications. 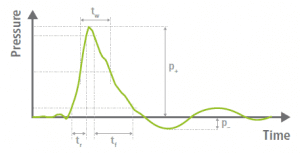 A single positive pulse conducted numerously over time is dramatically more effective than acoustic wave therapy as the energy of the shockwave reaches the soft tissue of the penis, also known as the corpus cavernosum. The energy must reach this area of the penis in order to stimulate the desired response of blood vessel growth.